Africa, the second largest continent in the world (both in size and population) after Asia, is a continent rich in culture, history, language, minerals as well as human resources. Africa plays a significant contribution to the population of the world at large, with some countries having over 50 million people.

Africa Is home to 54 counties and host to numerous cities, both large and small. This article provides the largest cities in Africa.

Cairo is the largest city in Africa with a population of 21,750,020 people as of 2022. the Egyptian capital is a tourist haven having some of the best-kept Egyptian civilization relics and sculptures.

It is most famous for the Giza pyramid complex, one of the seven wonders of the world and many other eye-catching monuments of Egyptian history, making it a great tourist centre that draws curious minds and eyes to it. Aside from tourism, Cairo is also a strong financial centre in Africa with some of the continent’s top financial institutions.

Formerly known as Léopoldville, Kinshasa is the largest city in the Democratic Republic of Congo with a population of 15,628,085. There exists a significant presence of large manufacturing companies from Marsavco S.A. All Pack Industries and Angel Cosmetics.

Financial institutions from Trust Merchant Bank, located in the heart of the city, also add to the financial development of Kinshasa.

Lagos is the busiest and most populated city in Nigeria. The port city is a hub for services ranging from finance, technology and trade.  As of 2012, Lagos was the largest city in Africa, surpassing Egypt with its 21 million population; nonetheless, this number was disputed by the United Nations in 2013, which placed Lagos’ population at almost half its declared size at 11.2 million. As of 2022, the current population of Lagos is placed at 15,387,639 people.

Lagos is also known for its significant level of entertainment and relaxation. Nonetheless, the city rests on an enormous expanse of land measuring about 1,171.28 square kilometres, which is almost twice the size of New York City, three times the size of the entire nation of Seychelles and 90% the size of Mauritius. The city has a population density of 6,871 persons per square kilometre.

Luanda is the capital and economic, cultural and educational nerve centre of Angola. It consists of numerous national treasures and historic monuments which make the city an attractive destination for various tourists and immigrants.

The city has a population of 8,952,496 people as of 2022 and is the only city in Angola with a million population. Luanda is also the largest Portuguese-speaking city in Africa.

The city of Dar es Salaam is another financial and cultural hub of Africa with a population of about 7,404,689 people.

Usually referred to as “Dar” for short, the city plays the capital of Tanzania and holds most of its cultural and historical heritage which attracts tourists, visitors and immigrants from all over the world. One such great sight is the fossils of human ancestors found by anthropologist Louis Leakey years ago, kept in the city’s museum.

Khartoum is the largest city and capital of Sudan. The city lies on the Nile confluence and flows North from Lake Victoria.

The historic city is over 200 years old with a land area of 1,010 square kilometres. The city of Khartoum has led significant development following the discovery of oil in Sudan.

Johannesburg is the largest city in the Southern Africa region with a significant economic presence in the city. Johannesburg is the world’s largest landlocked city with a population density of 2,900 persons per square kilometre.

The city is also Africa’s most powerful financial centre, hosting Africa’s largest exchange and the headquarters of some of the biggest companies on the continent.

Abidjan is the second largest city in west Africa and is the largest french speaking city on the African continent.

The city has significant economic, commercial and trade prospects and influences the economy of Cote D’Ivoire. Abidjan plays host to some of the best entertainment destinations in the country.

Alexandria is the second largest city in Egypt. The city has a population of over 5 million people and a population density of 4,800 people per square kilometre.

Aside from Egypt, the city of Alexandria possesses a more significant economic presence and trade than any other Egyptian city.

The Ethiopian capital is the largest city in east Africa and the 8th largest on the continent. The city is a strong tourist and financial centre, which hosts the African Union headquarters.

The city has a density of 5,165 people per square kilometre.

Why is the African population growing so rapidly?

High birth rates account for the growth in the population of most African countries. Immigration from rural to urban areas also attribute significantly to the growth of African cities.

What are the basic amenities lacking in African cities?

African cities lack amenities from proper housing, clean water, good roads and in some cases food is also in the lack. 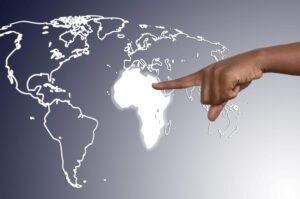