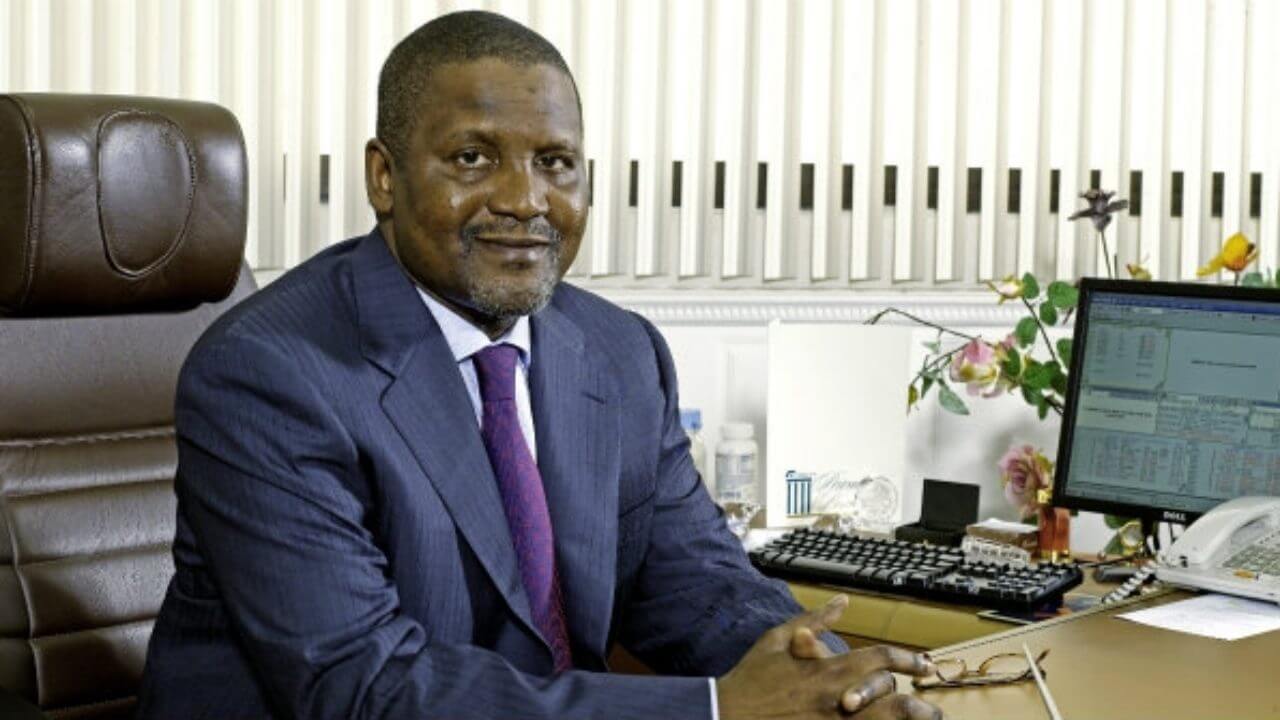 From selling sweets (candies) at an early age to becoming the richest man in Africa and one of the richest in the world, MakeMoney.ng takes a look at how Aliko Dangote made his money.

Dangote is a man proud of his family and he is happy to let everyone know that he was raised with lots of love and that gave him confidence in life.

“My great-grandfather was a kola nut trader, and the richest man in West Africa at the time of his death. My father was a businessman and politician. I was actually raised by my grandfather. It’s traditional in my culture for grandparents to take the first grandchild and raise it. I had a lot of love, and it gave me a lot of confidence.” He told Time Magazine during a world economic forum event.

While it is common for children born with silver spoon to be at a comfort zone and enjoy the wealth, Dangote’s case was different. At an early age, while still in primary school, he started looking for his own money. He will sell sweets (candies) to make money in school.

“I can remember when I was in primary school, I would go and buy cartons of sweets (candies) and I would start selling them just to make money. I was so interested in business, even at that time.” He said.

Not much as been said about his father and mother, that is because he grew up with his grandfather. He only get to know his parents when he was over 4 years. Sadly, he lost his father when he was just eight years.

Dangote had this to say about this.

“I grew up in Kano, Nigeria. After my school I went to Egypt and finished there. Then I moved on to Lagos to do business. I learned quite a lot from my late grandfather. He was in trading. I actually grew up with him. I didn’t know my parents until I was about 4 or 5 years old, and unfortunately my father died when I was 8.”

At 21, he completed his degree in in business studies and administration at the Al-Azhar University in Egypt, one of the biggest Islamic universities.

Aliko Dangote has credited his success to the training he got from his wealthy grandfather. His family were into business and trading, that was what surrounded him growing up and naturally, his mindset started tilting towards becoming a business man.

But at what age did the business instinct started and he realized he was going to be a businessman?

Apart from selling sweets in primary school, Dangote also worked diligently for his uncle, Sani Dangote. This set the stage and laid the foundation, for Aliko Dangote to go on and dominate the business world.

In 1977, at age 21 Dangote felt it was the right time to be his own man and start his own business. He approached his uncle, Sanusi Abdulkadir Dantata for a loan. His uncle eventually gave him a loan of N500, 000 ( about $3000 in today’s value).

The purpose of the loan was to to start importing and selling of agricultural product in Nigeria. The commodities he traded included: Sugar, rice, pasta, salt, cotton, millet, cocoa, textile and vegetable oil. His major imports were rice from Thailand and Sugar from Brazil in wholesale quantity and resale in Nigeria for interest.

This venture became an immediate success for him and he was able to repay the loan he took from his uncle within 3 months.

In 1978, Dangote ventured into Cement, buying in trucks and reselling to others for profit. The business became a success but he eventually decided to stop it and concentrate on Sugar, rice and other stuffs.

He eventually returned back to Cement, this time bigger.

“Back when we first tried cement in 1978, I was just trading—buying four trucks of cement, selling it, and making my money. Almost every day I was getting an allocation of four trucks. The business grew, but then we decided to dump cement so we could get into sugar, rice, and other commodities. When we went back into cement with that first factory, within the first year, we went from zero market share in Nigeria to about 45 percent. Now the country is producing 42 million tons, of which 29 million tons is ours—and it’s not only Nigeria that we ­benefit, but we’ve also been able to go to 17 other African countries. By 2019 we’ll have 80 million tons of capacity.”

He went back into cement business but this time as a manufacturer. By 2005, he had built a multi million dollar cement factory. Of the money spent to build the new factory, $319 million was his own money while a $479 million loan from the World Bank completed the financing.

“Manufacture, don’t just trade. There is money in manufacturing even though it is capital intensive. To achieve a big breakthrough, I had to start manufacturing the same product I was trading on; which is commodities.” He famously said

Being a successful business man most times means taking lots of loans. While this is good, if these loans are not paid back, you may be at the risk of losing it all. Dangote understood this and by 2010, he paid off his debts.

“I had no financial capacity (in 2015 when he planned his refinery). Then in about 2010 we paid all ­Dangote Group’s debts, which amounted to $2 billion, and started accumulating cash.

“It was a turning point. It helped us to be more disciplined. We are not trying to hide our heads from the banks. It has also given us a model to be very prudent and also be financially robust. Because normally people go out there and do project financing. We don’t do project financing. We leverage our current businesses and then build another new business. So in the head office here, what we do is only strategy and incubating various businesses.” He told Bloomberg

Producing his own electricity

One of the biggest obstacles faced by businessmen in Nigeria is electricity. Electricity is so bad that if you don’t handle it properly as a manufacturer, you will be making loses.

To make money as a manufacturer, you must be able to address the issue of electricity and Dangote understood this so well.

“We had a lot of capital, and we were able to build out our own power grid. The number one thing that kills businesses in Africa is power, or the lack of power. We wanted to have our businesses completely independent, with our own grid. So we built it. It took $1.2 billion.”

Having access to capital is very crucial for any entrepreneur or business. You have to be able to work your financial links to get the capital you need. Without capital, business suffer, your plans suffer and you may find yourself stagnant.

Dangote understands the important of having access to capital.

“It’s so important to have capital. At that point, we had about $2 billion in debt from expanding so quickly, so we had to scale back. But if I had more capital [in hand] in 2008, I could have bought so many things – homes, airplanes, land – so cheaply.” He told Time magazine.

Being a big player in Africa can be difficult without political support and goodwill. This is something Aliko Dangote understand so well. You need to maintain a good relationship with governments and politicians to avoid friction that could slow down business.

This is what most businesses do. It is simply about relationships.

In 2003, Dangote gave over N200 million to the re-election bid of former Nigerian president, Olusegun Obasanjo.

“In Africa, yes, I do think you need politicians. But at the same time, we cannot get things right unless there is good cooperation between the politicians and the businessmen. It’s a win-win. When you look at it today, in Nigeria, more than 85 percent of the GDP is from the private sector.” he said.

One thing that is very consistent with Aliko Dangote is need to expand his businesses. He is always on the increase, entering new territories and new line of business.

So far, he has extended his businesses into many African countries including: Benin, Cameroon, Togo , Ghana, South Africa, Tanzanie, Kenya and Zambia.

He has also step into the oil industry with a construction of $11 billion refinery ongoing in Lagos, Nigeria.

“Let me tell you why we had to go into oil. Our strategy was to be an African company. When you look at the other options, it’s really agriculture—and agriculture doesn’t take that much money. We always invest most of our money back into the business, so when we looked at it in 2015 and projected our revenue for the next few years, we looked at what we had left after investing in fertilizer and realized we still had billions of dollars we could put somewhere else. The only place we could invest that much money was in the oil and gas business. So the refinery takes those dollars and allows us to invest in something we are used to, which is industry.”

He has stated of his intention to build 60% of his business outside Africa from 2020.

‘‘We are not doing like other Africans who keep most of their money in the bank. We do not keep money in bank. We fully invest whatever we have and we keep on investing.’’

Dangote is the Chairman and CEO of Dangote Group. The group has over 30,000 employees.

The Dangote group consist of the following companies and businesses

Aliko Dangote Net worth and properties

Dangote is the richest man in Africa and has been for many years.  In 2013, he became the first African entrepreneur to be worth over $20 billion. As at October 2018, he is worth over $11 billion according to Forbes.

Aliko Dangote house is a mansion he lives in Victoria Island of Lagos State in Nigeria. He mentioned he has houses in the United States and of course in Kano.

He has a yacht, private jet and cars.

Aliko Dangote has built on the wealth of his family and took it to another level.

He gives back to the society through the Aliko Dangote Foundation. The organisation has spend over N16 billion on charity and Dangote has promised to give more money to the organisation, up to N200, billion.

We will end this article with his advice to young entrepreneurs:

“I built a conglomerate and emerged the richest black man in the world in 2008 but it didn’t happen overnight. It took me thirty years to get to where I am today. Youths of today aspire to be like me but they want to achieve it overnight. It’s not going to work. To build a successful business, you must start small and dream big. In the journey of entrepreneurship, tenacity of purpose is supreme.”

4 thoughts on “How Aliko Dangote made his money”